Artists are often the arts’ worst enemy and the true Internet of Things. #

We have met the enemy and he is us.

The Internet Age has brought about one aspect of humanity that we may have never realized we all share—the ability to be outraged at the drop of a hat. This is the real problem at work here. What the Internet helps is not only being collectively outraged at essentially nothing significant, we can also express this outrage instantly, without even giving it a second thought.

That is a real problem, too, not giving these things a second thought, much less not much of a first thought.

Christians love to cry “foul”. No matter how many churches (as in the buildings), both active and inactive, litter a landscape[*], we somehow find comfort in behaving like we are a repressed minority, battling for our very endangered existence.

We find slight in the slightest things—such as Starbucks using simple red cups for their Christmas season (I have always thought of red as a suitable Christmas time color, and Starbucks is quite often very minimalist in their decor and design decisions).

Maybe it goes back to those coliseum days when we faced down lions or gladiators simply because we were Christians. We want to identify with our brethren of old. Or maybe there is something that we think solidifies our faith only in the face of adversity, real or imagined.

In reality the only thing that may be truly endangering our Christianity is ourselves, how we live, and how we treat God and others, especially in light of God’s unfailing love for us.

The first one here is from a dance wear company, Bloch: 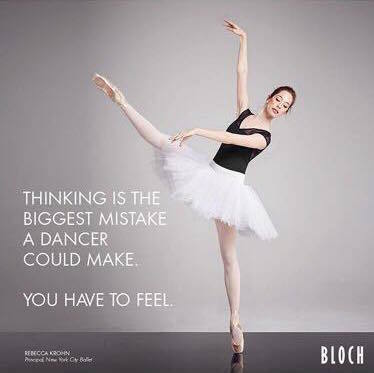 Thinking is the biggest mistake a dancer could make. You have to feel.

A little background based on some correspondence someone I know had with the company. They attributed the quote to Michael Jackson. Someone at Bloch found the quote inspirational, put it with one of their stock photos of a dancer wearing their apparel and put it on Facebook. This was a one-off on social media by someone not part of the marketing department.

Now the problem here is on a few fronts. First there are a lot of thinking dancers out there, a few who took immense offense at this sentiment. If nothing else I hope I inspire thinking artists. So I completely sympathize with their plight when confronted with this picture.

Second, there is this “frenemy” kind of relationship between many Modern based dance artists and Ballet based dance artists. What is historically required of young ballet dancers is this removal of their intellectual process, giving themselves fully to the choreographer, stripped of individuality especially for corps dancers. Now this may seem innocent enough. But it does represent a power hierarchy inherent to historic ballet that Modern dance artists reject.

There are other issues in historic ballet, that is largely rejected by the art form today, although that is still the root of much of the aesthetic. But this is not a full history lesson and you can find them on your own if you want. This is the internet after all.

To be completely fair, not all ballet artists work like this. As an example, one ballet company I worked for (Hubbard Street Dance Chicago) has some of the most intelligent and talented dancers I’ve ever worked with. And I think the choreographers who put work on the company both appreciate and benefit from that intelligence.

Third, however, is the real sore spot for artists and what makes this such a problematic argument for artists. We believe this sentiment. I’ve written about this many times already (Here Art need no justification, again and here Art as utility, for instance). More so, we practice this sentiment. We usually put a great deal of mental rigor into our practice, creative, and rehearsal or draft process. But when it comes to the actual performance and creation, we (as Bruce Lee once put it) “learn so that we can forget”. We want our skill and technique to be second nature so we don’t have to think about it when performing or creating.

Now, we may of course, use some sort of decision making process or other thinking during the performance, but it isn’t the same kind of analysis we put in during creation and rehearsal. We perform the results of that process, not the process itself. You can of course argue that it is all the same process, and I really won’t argue that. It is certainly a different part of the process, though, and that is the point.

So, then what are we left with? We have a company that expressed a sentiment that is shared and practiced by most artists, not just dancers. But we all know art is fully more than that sentiment. What is difficult is the Modern bifurcation of the intellect and emotion, and the corresponding promotion of intellect over emotion, as if one exists without the other.

That, to me, is the crux of the problem. Modernity and Modern society puts intellect over emotion. But art and artists puts emotion over intellect. Is it any surprise then, the arts have such difficulty finding support? In reality both are equally important. Both are part of addressing the whole of humanity.

To me this is the greater issue we, as artists should be addressing and be outraged about. Should Bloch be accountable for perpetuating a myth? Sure. But the problem is far more systemic. Bloch is simply expressing a symptom of the deeper issue that artists, themselves, contribute to.

That’s why arts education is so important. Which brings us to the next bit of IoTrage, the Wells Fargo ad: 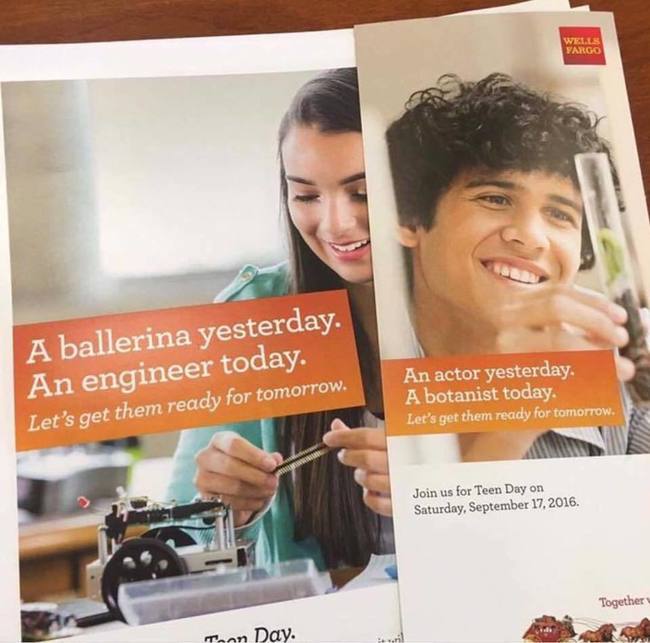 Man, did THIS get artists riled. They almost unanimously excoriated the ad. They believed the ad expresses that art is something you leave behind to pursue more important careers. That this ad somehow expresses that one can’t make a living being an artist. Or that interest in the arts is somehow childish and one needs to look to the sciences and engineering to be an adult of tomorrow.

Artists are just as bad at interpreting things as non-artists. Many misquoted the ad, saying the art was yesterday and the science was tomorrow. But is that what it is really saying? Look at the wording. There is a progression—yesterday, today, tomorrow. The goal is to make the youngsters ready for Tomorrow. And part of that process is art (yesterday) and science (today). It is NOT saying that art is less important. It IS saying that art is part of the process. Yesterday + Today = Tomorrow.

Think about this. If the point of the communication is to help teens be ready for tomorrow, why would they point out wasted effort? Wouldn’t they be better served to point out something that positively contributes to that process? And they have! They point out art!

And don’t we love to promote the studies and research that shows how music and dance improves various neurological connections? Or the psychological benefits of painting? If there are these material benefits, why wouldn’t an artist make a superior botanist or engineer?

Now, maybe Wells Fargo should have inverted some of those interests, and put artist second in the “Today” lines. But you can’t really tell me you don’t know people who started out as artists and then transitioned to other careers? There is an an organization whose whole reason for existence is to help former dancers transition to a non-dancer career.

Or you can’t tell me you don’t know someone who was a talented artist in school but went on to major in something else?

BFAMFAPHD.com showed where only about a third (IIRC) of art majors actually pursued a career in the arts.

This ad is not anti-art! I can remember a time, not that long ago, where art wouldn’t have even been considered. They would have put some sport in the ad instead.

But the outrage is understandable, too. Art and artists have been marginalized for the better part of the 20th century. We are faced with opposition in support, both financially and in simply justifying our existence as a career choice or in education. We have cause to be hypersensitive.

But let us not create enemies where there are none! Is there something to be outraged about regarding the importance of art in today’s society? Yes. But this ad ain’t it!

I started out talking about Christians. Then I wrote on artists. WTH?

I did that on purpose. First, to further illustrate how the issues the Church faces are similar to the arts, often ironically so.

Second, in hopes of shaming my fellow artists for ironically behaving like a group they often love to marginalize themselves.

And all in hopes that we will recognize this Internet of Things Outrage we all seem so willing to participate in. I am just as guilty. This post could easily be seen as continuing the trend.

I prefer to think, though, that this is a call for ALL of us to be more thoughtful and careful about expressing our outrage. Save the effort for when it is truly needed. And for artists and Christians to wake up and see how we have contributed to the problems that we often face.

Thanks for reading! Let me know your thoughts.

[*]I remember looking for an apartment in Bed-Stuy, Brooklyn, once and being amazed at the number of major church edifices I found within just a few blocks of each other. And I don’t mean old storefronts converted into churches.

You turn me upside down! We live in a time when Modern systems, once thought unshakeable, are being disrupted and turned over worldwide. Industries, governments, and institutions built and strengthened in the height of 20th century... Continue →