My cat could do that (and may actually have)

In attempts to understand complex issues, it is not uncommon nor unreasonable to sometimes reduce issues as part of a larger process to work something out. This can help clarify some things, figure out where pivotal problems may exist, root causes, etc. While it can often be an important part of Minimalism, it can just as easily be found utilized for other, less thoughtful purposes.

Sometimes we settle into a reductionist conclusion from the outset because, well, we may think it obvious or easier. I think this is where we are with much of the discourse of art, especially in the current environment surrounding discussions of government support of art, particularly in the form of the National Endowment for the Arts. Critics of Modern art (whatever one may mean by that, and it seems no two people are actually referring to the same thing) are again emboldened to express their displeasure (couched in reason and logic, even though still opinion) about anything other than, and post, Classical art.

Sister Wendy has this to say in an interview with Bill Moyers. In this part she discusses the Serrano work Piss Christ.

“Comforting art is art that’s very easy to react to, and I might be tempted to say that Serrano’s Piss Christ is comforting art, in that everyone knows exactly what they think about it…
”…He had an immediate… he thinks he’s right, and he hasn’t had to think about it, obviously. Now that’s comforting, “so nice to know I’m right”. And there’s quite a lot of art that gives that instant satisfaction of feeling that I know I can judge this without having to look, without having to take the trouble. “I just know because it is so obvious”, that’s comforting. Where as you see the real art makes demands"

Through all the bluster, the common theme in any article I’ve read, such as George Will’s recent article in the Washington Post looking to abolish the NEA, or the blog by Catholic University of America, John Garvey, trying to assess “today’s art” (another reduction) as Empty Chaos. Or the resurrection of videos such as by Jordan Peterson on What’s wrong with Modern Art. The problem expressed in each of these expositions in one form or another seems to revolve around an idea of “rules” and their importance.

None of the issues attacked are as simple as expressed. George Will seems to think anything calling itself art can get funded. One can only conclude that if they have never actually applied for a grant either from the NEA or from an organization funded by the NEA. The government actually is not deciding what is and isn’t art. That is dependent on the organizations funded, put in the hands of the local citizens, deciding for themselves what art or artist should receive funding, and that by an application process. So, yes, while you can let your grass grow out and call it art, don’t expect to get NEA funds on that basis alone.

The reductionism is two sided #

The problem isn’t only that they have reduced the complexities of an art that spans over a century and many forms, including impressionism (Manet and Monet) and post-impressionism (Gaugain, Van Gogh, and Cezanne). The problem is that they have reduced something they call Classical art, stripped it of its context, its moment in history, and lifted it as some arbitrary golden rule, ignorant of Classicism’s own complexities, movements, and roots.

There is a lot of history important to all this, involving politics, religion, philosophy, science, artists, and government. I don’t have the time and you probably don’t have the interest in a more thorough examination within this article. But because this is an historic appeal on the critics side we should examine what they think when they look to the past.

Art, as any form of expression, is always a response to or reflection of something. Each movement of art is a response to and growth from new ideas and discoveries. Even the Renaissance was a response. The Italian Renaissance (What? You didn’t know there was another Renaissance?) was partly fueled by a renewed interest in Greek and Roman culture, a return to humanism. The Renaissance was its own revolt from what was considered acceptable artistic skills, forms, techniques, and most importantly art’s purpose and found a renewed interest in humanism. The term we use to classify a pre-Baroque aesthetic, Gothic, was itself a derisive term coined at the time, a term of abuse used by “Italian Renaissance artists and others like Christopher Wren, to describe the type of Medieval architecture they considered barbaric, as if to suggest it was created by Gothic tribes who had destroyed classical art of Antiquity”.

With this renewed interest in Greek and Roman culture came a resurgence in humanism, as well as the idea of the Universal from the Theory of Forms, the idea that “The only true being is founded upon the forms, the eternal, unchangeable, perfect types, of which particular objects of moral and responsible sense are imperfect copies”.

The resurgence of humanism is what turned paintings and sculptures of deity to take on more natural, human forms. Compare this Byzantine painting of Madonna and Christ, where Christ is depicted more as a small adult than a baby: 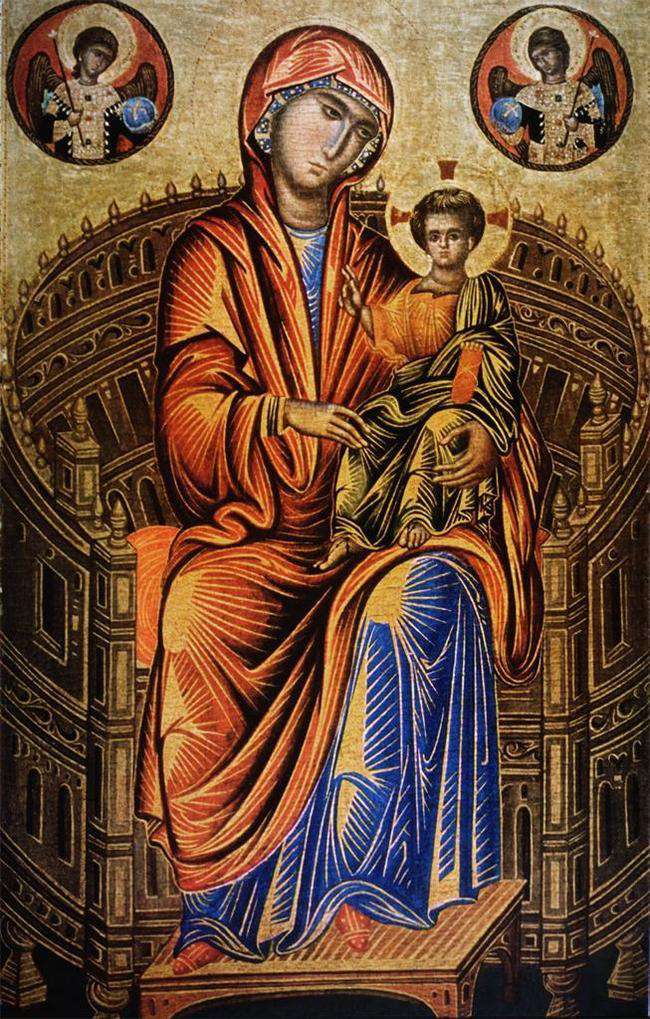 To this renaissance painting where both Madonna and child take on more human forms as the Church sought to emphasize Jesus’s humanity: 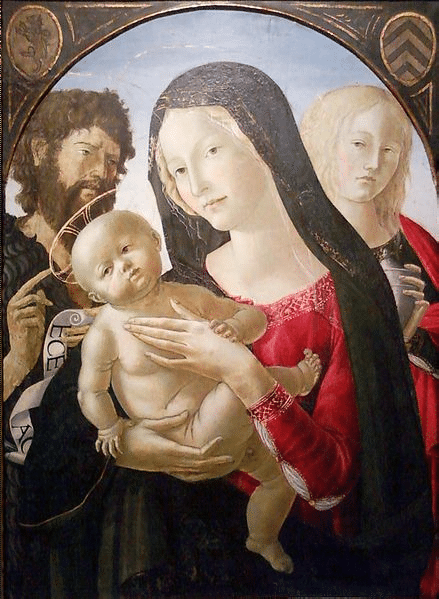 With new discoveries in science we became enamored with trying to define and understand things as they really are. Painting and sculpture needed to take on more realistic forms, we wanted to depict what was really there. This of course required more skill and technique. But this skill and technique were driven by the attitudes and considerations of their day, the questions and answers of which people of that time were enmeshed.

Ironically, they would do with painting and sculpture what we do with Photoshop today, all in an effort to find the Ideal, the Universal. Portraits of people would often leave out or hide blemishes and imperfections of their subjects. Sometimes it was due to the vanity of the subject. Sometimes it was, as with da Vinci’s Mona Lisa, to find the universal in the particular.

Cezanne tried to paint the Appleness of an apple, the Ideal of apples. Picasso tried to find the universal forms in everything through cubism. Pollock tried to paint that for which no form yet existed or get straight to the Ideal bypassing accepted forms. Rothko wasn’t trying to paint a representation of something, the painting was its own thing, its own particular of the Ideal.

With history illustrating a different narrative than Modern/Today’s/abstract art detractors and opponents seem interested in, we are left to wonder why are they so passionately opposed to contemporary art that does not conform to Classical forms?

I think this brings us back to Sister Wendy. For some reason these people are offended not just that a person created these works, but that this person calls themselves, and is called by others, an artist. And that the work is called art. And they are offended that they cannot view this art with the same lens and rules they are most used to and comfortable. These new art works are demanding they re-examine that which they have already settled upon.

The new art requires they become vulnerable, vulnerable enough to understand something new. This questions their certainty of how things should be, what is and isn’t, because if this is art then they may have been wrong. That makes them feel threatened. That is not a comfortable position to be in.

There is this nostalgia, this romantic notion of how things once were. They were better then, or simpler, or easier, or more certain, or whatever. Consider the Hebrew people as they escaped Egypt. Change is a difficult thing to live through.

Of course I am well aware of my own irony here, my own reductionist presentation of complex issues. But my argument is reduced to show how difficult it is to reduce the discussion in general and point out that the argument for Classicism or the argument against Contemporary cannot be reduced to “My cat could do that”. First, you cat didn’t, even if it could. Second, why aren’t you selling your cat’s work?

The answer, of course, is education, learning, being open to understanding. But that won’t happen, because, as I said, it means being vulnerable and that is too uncomfortable. We’d rather react with certainty that we are right. Not because we’ve actually taken the time to look, to think, the trouble to understand, but because “the best defense is a good offense”. And apparently some are quite offended.

No one asked, though, if what is actually being defended is worth defending? Why do those rules exist? What rules existed before and why did they exist that the new rules (including Classical rules) needed to replace the old rules? What questions exist now that the old rules just do not answer? Why would we even think we have answered everything there is to answer?

There is nothing to fear in new questions. There is no reason to believe we have asked all the questions, much less come up with all the answers.

What are your questions?

Artists are people, too!

Don’t use artists and don’t ignore artists Artists are both different and the same. Artists typically do have an intrinsically different take on situations and life. There are different approaches for conveying meaning, both to and from... Continue →